Samsung Is Finally Reclaiming All Its Note 7 Mini Bombs.

Samsung Note 7 was once the hottest Android mobile in the world. However, unfortunately more than dozen of these phones exploded while being charged – in some cases, the handset met its demise while in use and unplugged- which caused property as well as physical damage to the users. Following these incidents, Samsung issued an unprecedented global recall, asking its users to exchange or return the devices. It took the company five months to plan this recall. Samsung is trying to ensure that its Android mobiles do not contribute to anymore damage.

Most of the destructive phones have been retrieved by now. However, some users are refusing to handover their Note 7 handsets. Samsung is planning to disable all its remaining Note 7 smartphones with in next few weeks, if Yonhap News, a South Korean news reports are to be believed. The company is estimated to have sold over 1 million handsets, out of which 97% have been reclaimed. 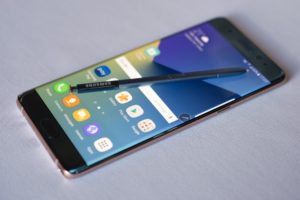 Samsung is planning on issuing mandatory update software that will permanently prevent all the remaining devices from being charged. A similar software update was issued last year in USA, which is being used to get the remaining sets in the market. It is a good thing for Samsung lovers, that the company is unveiling its new smartphones Galaxy S8 and Samsung Galaxy S8, which are expected to be release by the next month.

« Violent Live-streams Continues To Remain A Challenge For Facebook
Google is Working on a Mysterious New Phone. »